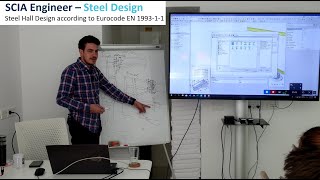 Learn BIM software from the comfort of your home 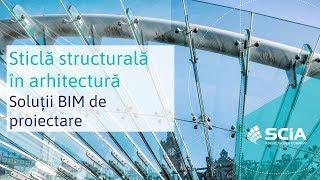 I have over 5 years of experience in teaching BIM Software in Technical Universities to students and senior engineers and dedicated my last 3 years into studying glass structures.

I want to share the knowledge that I have with other engineers and architects worldwide, and build an international community. Hope you will enjoy my work!

Abstract: The article intends to present different methods in which a structural designer can analyze glass structures situated in Seismic Areas. Three theoretical approaches are presented in this article and a case study is used to demonstrate the importance of seismic action for a glass structure. The chosen mathematical model is created using the Belgian software “SCIA Engineer” together with an integrated module, developed by the author with coding support from the company Nemetschek Romania Sales & Support. In this example a real executed structure, designed in a low seismic area like NY, USA is relocated in a strong seismic area such as Bucharest, Romania. The study showcases which of the horizontal force (wind/seismic force) will lead the design, how these forces influence the global behavior and a clear conclusion is drawn.

Glass structures are special, and to most of the public they can generate fear and doubt regarding the safety they offer.

There are many impressive glass structures in the world of different sizes and with different functionalities. Most of them are designed in non-seismic areas, but in some areas such as Romania, an earthquake can be an additional source of fear when being inside a glass structure ......

or just swimming to the apartment situated across the street.

The case study presents the reactions and deflections a glass cube structure gets from horizontal forces, generated from wind loads in comparison to those that are generated from a typical Romanian Earthquake in Bucharest. The structure is the entrance to Apple Store, situated in reality in NY, USA but the actions are evaluated as this structure would have been placed in Bucharest Center. In Fig.4 we can see a simulation in Google Earth for the Location of a Glass Cube Structure in Bucharest.

The case study presents the reactions and deflections a glass cube structure gets from horizontal forces, generated from wind loads in comparison to those that are generated from a typical Romanian Earthquake in Bucharest. The structure is the entrance to Apple Store, situated in reality in NY, USA but the actions are evaluated as this structure would have been placed in Bucharest Center. In Fig.4 we can see a simulation in Google Earth for the Location of a Glass Cube Structure in Bucharest.

In seismic areas the earthquake action has to be taken in account, as experience shows that the collapse of a glass element, no matter if it is a primary or secondary structural component may result in a high number of death and injuries.

Eurocode 1998-1 offers the combination rules for combining seismic loads with the other permanent and live loads. ULS verification will include the effects of gravitational and climatic loads from combinations according to Equation 6.10 and Equation 6.12. (Feldmann, 2014)

2) Structural elements made with glass and other materials which possess certain ductility.

3) Glass elements that are not part of the earthquake resisting structure, they don’t get loaded with horizontal force, but they are relevant for inhabitant’s safety (ex. Interior wall panels, edge curtain walls).

The first category of elements will be designed according to 5.5.2.1 of EN 1990, to withstand the design seismic force without any damage (ex: cracking), for the EN Seismic Combination 6.4.3.4 of EN 1990). The seismic force will be evaluated according to EN 1998, assuming a behavior factor of q=1. By using this elastic design approach, structural integrity is assured even after the seismic event.

According to Eurocode 8, the design seismic action for the non-collapse requirement is calibrated for a reference probability of more than 2% within the reference return period.

Structures whose earthquake resisting structure include glass elements and other materials, will be designed so that evaluated stresses will not cause cracking for the reference seismic action, in design combination with the other actions according to 6.4.3.4 of EN 1990.

The ULS checks will be based on linear analysis with energy behaviour factor q=1 (No energy dissipation and no ductility). A primary seismic member and its connections must be designed and detailed to support loads for the whole structure and from other elements (of superior order), in addition to its self-weight and out-of-plan load, when subjected to displacements caused by the most unfavourable seismic design scenario.

Also, glass structural members, that are not pertaining to earthquake resisting structure but are relevant for the inhabitant safety, shall withstand without collapse the calculated stresses generated by the reference seismic action.

2.2 Structural elements made with Glass and Ductile Materials

If the resisting structure for earthquakes includes a dissipative system (ex. Hybrid seismic structure composed from the glass system and another material, like RC (reinforced concrete) or a steel frame, the design should follow the principles of Capacity Design (Hierarchy of Resistance). Failure of glass system is only accepted for displacements greater than the ones produced by the seismic action correspondent to the no-collapse requirement. The hierarchy of resistance aims at ensuring an overall dissipative and ductile behaviour, as it is specific for structures made from different materials than glass. Additionally, the hierarchy of resistance aims at avoiding brittle failure and unstable mechanisms formed prematurely. To achieve this, the capacity design procedure will be adopted, which is used to obtain the hierarchy of resistance for the different structural elements and choosing failure modes that guarantee a favourable plastic mechanism and avoiding brittle failure modes.

The connection for the primary seismic loaded members shall be designed and checked with the seismic action associated with the no-collapse requirement. The check has to consider both relative displacements and internal stresses.

2.3 Glass Elements that are not part of the Earthquake Resisting Structure

When modelling the entire building, the strength and stiffness of secondary elements is neglected, considering that in case of their failure, the ultimate resistance of the main structural system can guaranty the buildings integrity and safety. Special considerations have to be made when dealing with lateral forces generated from seismic actions. In some situations, the in-plane stiffness provided by secondary elements can have a significant contribution to the inter-story lateral stiffness, even if, due to the lack of ductility, no allowance is actually given to including such stiffness in the calculation model.

Based on these premises two requirements can be specified:

Under ULS (Ultimate Limit State), the strength and stiffness of the structural system, relying only on the primary elements, shall be verified and the secondary elements shall be checked for the lateral loads directly applied onto them. Also, they will have imposed displacements which originate from the primary system deformations.

Under SLS (Serviceability Limit State), in case the contribution of secondary elements to the overall system stiffness is relevant, the resultant stresses on the secondary elements will be added to the lateral loads directly applied onto them.

The inter-story drifts require being limited in accordance with the displacement compatibility with respect to glass elements. The secondary seismic member and its connections shall be designed and detailed to avoid cracking during the earthquake event associated to the no-collapse requirement.

Moreover, these secondary elements and their connections, must withstand their self-weight and also the out-of-plane loads when subjected to the displacements caused by the most unfavourable seismic design condition. Second Order effects (P-δ) need to be taken into account when designing secondary seismic members.

Glass secondary structural elements in seismic areas should be executed after the hardening of the concrete structure or the assemblies of the steel frame and after the displacement have settled. These elements are allowed to be in contact with structures (ex: without separation joints) as long as they don’t have a structural connection with them.

Beyond the safety margin of the compatibility check, for the secondary structural elements appropriate measures should be take into account in order to avoid cracking, brittle failure or collapse of the lass during an earthquake event due to the drift of the structure. Partial or total out-of-plane collapse is not unlikely, thanks to the high strength-to-mass ratio of glass elements.

This movement is allowed through the usage of a larger than typical clearance between the glass and the steel framing. A simple formula to calculate the required clearance for a flat rectangular panel is given in Equation 1.1, which is taken from the American Standard ASCE 7-10 Minimum design loads for buildings and other structures (O’Regan, 2015)

c2 is average clearance on the top and bottom

h is the height of a rectangular panel

b is the width of a rectangular panel

This concept of movement and flexibility has to me extended throughout the structure, especially in the point support areas.

3. Case Study: Seismic Analysis of a Glass Cube Structure in a Seismic Area

The cube is the entrance to the Apple Store, and in this example only the superstructure has been modelled with a hinged support from the ground. The loads evaluated for this structure are specific for Bucharest. Snow load of 1.60 kN/m2, Live load of 0.5 kN/m2, Temperature Variation of +25 °C, Wind load (Reference speed 30 m/s). The 3D Wind 9distribution has been done according to Eurocode 1991-4 automatically using SCIA Engineer’s 3D Wind Generator. The Earthquake load has been modelled using the design spectrum method according to P100-1/2013 (Fig. 6).

The purpose of this analysis is to compare the maximum results in terms of stresses and deflections for a full complete glass structure in order to evaluate which scenario (Gravitational or Seismic) are dominating the design. In Fig.7 we can observe a comparison from maximum 3D deflections point of view. On the left side it is shown in iso-lines a maximum value of 18.8 mm corresponding to and SLU Envelope of combinations generated according to equation. 6.10 from EN 1990. On the right side we can observe the maximum deflection of 4 mm from the SLU Envelope of combinations generated according to equation 6.12.

In the first model we can see that the deflections are higher in the mid span due to the wind load which manifest a higher resultant force in the middle of the vertical panel while in the second model (Seismic combinations) we see a smaller maximum deflection, situated on top of the structure. Thus, it may seem that the earthquake generates smaller deflections than wind.

If we judge by the base shear resultant forces the results are not consistent with the deflection ones. The maximum horizontal reactions from the envelope of combinations generated with equation 6.10 (Gravitational & Climatic loads) generates a maximum of 176.50 kN, while the maximum shear force generated with seismic combinations is 172 kN.

The case study presented above illustrates that reactions from the base for a structure with a height/width ration of 1, with a rather tall height (~10 m) are almost identical from horizontal forces resultant from Wind and Earthquake. Although the base shear forces are almost identical the displacement distribution is very different. Maximum deflections from wind appear in the mid-section of the vertical panels, while maximum deflection from seismic forces appears on the upper part of the structure. Modal analysis also offers an insight on the way the structure behaves, and by studying the Eigen frequencies, the torsion sensitivity can also be taken in account. The modal analysis also helps determine the fundamental vibration period, which is essential in adopting or not a base isolation method.

In conclusion, it is important to consider the seismic forces for any glass structure with primary elements made of glass along with the other gravitational and climatic loads.

Acknowledgements. The Integrated Glass Design Module used within SCIA Engineer has been developed by the author with the help of Nemetschek Romania Sales & Support SRL.

The product will be available starting December 2018.